Begin at the bottom with the needs, wants, and desires and move up from there. #'s correspond to definitions listed below.
Each # has layers to it, to be defined. ie: Greater desires vs lesser desires. 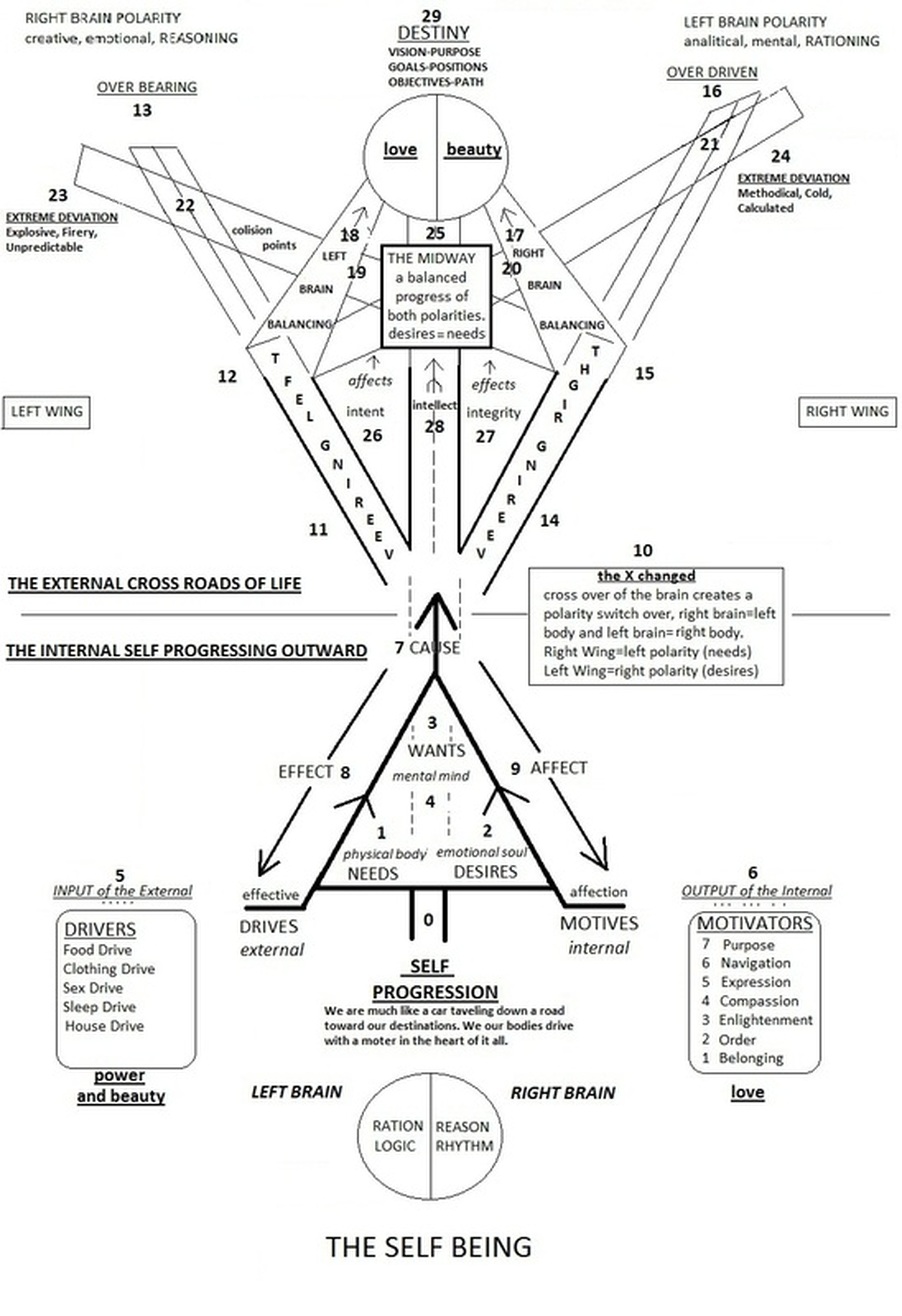 SELF PROGRESSION ILLUSTRATION # KEY to above illustration.

Understanding the Needs, Wants, and Desires that steers our choices us on our roads of life.

INTRO: This map is designed to be used to map out someone's past pathways and current progressions in a visual format that corresponds to their present state of being. (This is the shortened descriptive analysis.)

0-- START: Our bodies are the vehicles from which we either progress or regress. Our soul is at the wheel, either asleep or awake. We are the manifestations of two things. The first is our true self, the child we were born as and the true purpose and potential we strive to achieve. This is our core being. The second is the society of mixed variables that shape our perception and manipulate our emotions. With that, the notion of choice is merely the illusion that the past has no impact upon our present decisions made, without the influence of our subconscious to control the choices we think we are in control of.

1-- NEEDS: Needs pertains to the crucial variables within an equation that causes us to make the decisions we choose. They are rooted in the physical but they apply to soul as well.

2-- DESIRES:Desires pertain to the emotional aspects of our being and can be paralleled to our soul and heart. All things in balance, this would be the Yin, the feminine aspects of LOVE that balances out the Yang the POWER side of our being. If the Needs relate to the How, then Who relates to Desires. In addition REASON applies also to the Who, while LOGIC applies to the How.

3-- WANTS: Wants can be seen as our point of consciousness. It is based on the functioning of mind, hence bringing a balance between our needs and desires. Having a balance to both both polarities, LOGICAL-REASONING (#25), will lead us to our final destination of reaching our GOALS, VISIONS, and MISSIONS (#29).

4-- SELF-ORDER TRILOGY: The perfect triangle is architecturally the strongest building block in society and creates a movement of progress. When what someone's wants, needs, and desires are in perfect balance and harmony, you get a forward progress. The triangle must be in perfect proportion though, like an equal lateral triangle of 60 degrees each.

5-- DRIVERS: Drives pertain to the pathways we take to return home... much like a Drive Way. They are formulated on the basic needs of life. Being Over Driven (#16), can be applied to wearing out the motor of a car.

6-- MOTIVATORS: Motives are often mislabeled within our court systems, or at least in the media, as they are classified as the effects created in society and the affects impacted on individuals rather than something already existing. In reality, motivators are truly the aspects of love and the heart and when there is a lacking or imbalance within peoples' desires, you get actions of crime.

10-- The X CHANGED:The X factor is a variable that guides the EXCHANGE of information as it crosses the point where the internal becomes external and visa-verse. With regard to the brain, the right hemisphere of the brain controls the left side of the body and the left controls the right. The right side is considered the emotional and creative that provides the reasoning to our motives. The left side is considered the logical side that provides the analytical analysis, Left-Logic, Right-Reason.

11, 12, 13-- VEERING LEFT: This part of the illustration represent the gradual diminishing of the left brain functions as it relates to the aspects of logic. The weakness in the left brain veers the traveler to the left side of the road. People become irrational and eventually overbearing to be around and fiery with anger and hurt. They loose touch with the left hemisphere of logical balance. It is as if your left hand falls asleep at the wheel turning to the left as the right hand overpowers pushing and invading the left. The left has no pull or push within society.

14, 15, 16-- VEERING RIGHT:This part of the illustration represent the gradual diminishing of the right brain functions relating to aspects of emotion. Logics becoming false and illogical without the balance of reasoning and the connection of the heart. Crimes committed by these individuals are sometimes seen as “cold-hearted.”

12 and 15-- SWERVING and OVER STEERING:Swerving is different that veering in a way that veering is a gradual drift in the wrong direction while swerving is often a sudden violent changing of ones path or polarities. The faster someone is speeding down the wrong path, the more violent and dangerous the switch in directions becomes. If they are going at a fast pace and the turn is too sharp, the vehicle they travel in, such as their body, soul, and mind, can over turn causing them self destruction. If this doesn't happen and they continue on their sudden turn, then instead of gradually coming to balance, they OVER STEER crossing over quickly into the other direction.

19, 20, 21, 22, 25-- COLLISION POINTS: Within life we cross paths with many people for good and for ill. These intersections of life can define our relationships as well as our injuries.

Adding on the to metaphoric reality of the Kar-mic transportation is the reality of physics. The geometric angle of the intersection is also important in deciding the magnitude of damage. “What's your angle” pertains. In the case of collision #21 and #22, you have two paths that are already headed in a similar direction. There is a chance that they might see each other coming and adapt, unless one is in the other's blind-spots and not seen. If they adapt, then they can merge together until they come to a dead end. If they do collide, since most of the momentum is going in the same direction, they may be able to bounce off each other and experience minimal damage with only nicks and dents.

In the collision points #19 and #20, those whom on their way to achieving re-balancing suffer the most damage because they are unbalanced and vulnerable. In the visual, they would be side swiped by the swerving car at somewhat of a perpendicular angle. The word “Side-Swipe” also applies in the mental realm with regard to them loosing hold of the hemisphere that receives the first impact. At that point, a state of confusion will make it impossible for logical reasoning and the person will enter into a state of turbulent emotions.

In the collision point #20, the left car side gets swiped while the right hemisphere is trying to balance and the vehicle gets thrown onto the right shoulder. The right hemisphere, which was trying to bring balance and turn the wheel, gets swiped as the left side of the car gets hit. In this case the person will probably revert to coldness and illogical logistics without emotion, depending on their history and who is around to help. The further off the road people become the more difficult it is for them to get themselves centered and balanced.

In the case of collision at #25, the person that is going straight toward their destination will suffer more than two people who have collided at #21 and 22, but will suffer less than someone who gets hit while balancing. Physics speaking, they share a common direction even though there is enough of an angle to cause large damage. They may be able to avoid the collision if they look over their shoulders. If they do get hit, and moved they may be pushed into paths #17 or 18, in which case they will be on their way to re-balancing once they repair their vehicle of travel. The speed of the collider will set the variables as to the magnitude of damage and how far off their path they are thrown. The rate of recovery is dependent on if they have a support system.

#25-- THE MIDWAY: The term “Midway” refers to the balance forward, but also in the sense of the progression to their destination in a way that is a fun and inspiring. The things that they acquire will be the rewards to their wins, just like the games at a midway.

#26-- INTENT:The intent is a world that applies to motives and desires. Within the midway, the inmates must have a suitable intent with reasoning behind it. If it seems that their actions are lacking an authentic intent, they must be evaluated to see why they are disconnected from tones of the heart so that they may be guided back to balance. It relates to the what and who. What is IN the TENT they establish.

#27-- INTEGRITY: The word integrity is often used in different ways. Structurally speaking, the integrity of the foundation describes the way it is built, the materials used, and how they will stand up to weight and pressure. Within the individual, integrity relates to that which they set out to do and whether or not it is was accomplished in an equally beneficial manner. A person might be lacking structural order and be lacking of integrity, but still have a heartfelt intent. Like intent applies to desires, integrity applies to needs. If the material needed to create a solid structure is lacking, the individual might find a cheaper material that jeopardizes the strength and integrity of its construction.

#28-- INTELLECT: Intelligence seemed often considered within society to be in the mental realm. This is true, but only as far as healthy mental thoughts pertain to the balance of both physical and emotional well being. This would make physical intellect and emotional intellect. A common misconception by many is that because they have an abundance of knowledge that they have learned, then they are intellectual. This is not true. KNOWLEDGE in fact pertains to integrity... knowing how to do things with order. UNDERSTANDING relates to the ability of the heart to comprehend emotionally the balance of knowledge with sincere intent. With that said, truthful knowledge and authentic understanding creates WISDOM, the real inTellect. Wisdom is the lessons that we learn as we progress forward with knowledge and understanding.

#29-- DESTINY!: Destiny is the root of DESTINATION, just like QUEST is the root of QUESTION. When we arrive at our Destiny, the questions we thought are fulfilled by the answers we sought.