Is the MATRIX real?


Why yes it is... and so is the Music Matrix. The musical matrix is merely geometric and binary coding that is formed off the potentials of the music and in parallel to an Informational Matrix. Outside of some minor aesthetics, the creation of this Matrix is non-subjective. It's more of an observation than a creation.

TO USE AN EXAMPLE OF OBSERVATION:  If there are only 21 set of two chords possible out of 7 chords, there are only 21 potentials. The individual pieces have specific relationships and bonds to other pieces through commonality. If a 2x4 is the bond between patterns, the angles and points where they connect are the patterns. The same way a house has hidden structures behind the walls, so do the musical patterns and pieces. Through observation of them and their relationships to one another, including their symmetrical and synergistic properties, the potentials creation actual two and three dimensional architecture and geometry.

THE PROCESS OF CREATING THE ARCHITECTURE: After observing and collecting the many vast sets of potentials, the next step is observing the relationships between those potentials. When you pay attention to what they have in common and their unique relationships, such as symmetry and synergy, the geometric and architectural creations  form naturally. The process of assembling these pieces together is "puzzling"... They are puzzle pieces to a larger puzzle. In the same way one might assemble a puzzle, there is only one true and possible outcome that the pieces align into to manifest the greater geometric form. There's little subjectivity in it, you have the pieces and you put it together based on what is there. You're not creating the puzzle, you're assembling and observing it.

These systems are the natural and hidden orders, mostly undiscovered in music.
No one created them, THEY JUST ARE. They are eternal forms with no beginning and no end. Musical Architecture is just the mathematical structures of existence to the parallels of sound.

1. A web of an interconnected musical systems that trains people new ways of learning traditional and non-traditional theory at a dramatically quicker pace.
2. A multi-intelligent approach to learning music that allows those with different learning styles to bridge and translate their knowledge into music for easier learning.
3. A technological global music interface where musical training becomes available to those who would not other wise have access within all global countries and cultures.

1. To cross cultural barriers on a global front in ways that will give countries across the world access to training, as new trends helps unite them in healthy ways.
2. To help evolve global cultures ethically to be more conscious environmentally, socially, economically, and aesthetically through expansion projects built off the apps.
3. A universal system of order by which the musical patterns become recognizable within peoples daily lives and within the order of the world around them.

THE GUIDING PRINCIPLES and PHILOSOPHIES

1. Everything in the universe can be reduced to resonant frequencies and hertz: emotions, music, motion, light, brainwaves, consciousness, relationships, matter, etc.
2. No one is beyond saving and restoration is possible, however hard or easy that is.
3. Music and sound are part of our individual evolution and we all have the potential.

The BENEFITS for the INDIVIDUAL
​

1.  A new way for people to keep track of complex musical patterns and rhythms within their heads easily. Their music will become complex through simplicity.
​2. Activation of different neural cortexes within the brain with a "multiple-intelligent" approach to make it available to those discouraged by traditional learning approaches.
3. Shortcuts for playing to dramatically advance the learning process by simplifying out the over-complexity, while learning in multiplicity rather than just individual pieces.

The BENEFITS for the LARGER SOCIETY
​

1. Shifting emotions within large sectors of society in ways that will transition the slow and lethargic to become animated and motivated to achieve progress.
2. Transformation of the music industry in ways that is elevates the quality as a whole, setting a new standard of quality that uplifts the greater populations.
3. Cross-cultural communication through music that will give a common focus, helping to transcend cultural conflicts through an inspiring common denominator. ​​
​

WHY is there the NEED for such MATRIX SYSTEMS?

1. The Collective Boiling Point: Our societies breaking points throughout the span of our histories often leads to revolutions, riots, wars, and other desperate measures to force change and express frustrations. Like a cornered deer, if they are not given a positive means forward, they will turn to destruction.

2. Shifting Frustrations into Fruitions: While the boiling point is a consequence of not having inspired movement, the positive outcome of something out of this world to unite and inspire people is a very good reason "why" it's need. The advancement of technology in new and wondrous ways can help refocus people’s energy in a positive direction into the saturation of creativity to manifest a musical revolution and renaissance.

3, Music as a Universal language of Emotion: One of the things the world desperately needs is to bridge our warring cultures and classes. We need to awaken empathy within those who cause hurt, inspire generosity within the greedy, spark hope for those in pain, and bond community for the isolated. We need to understand the potential of music on a deeper level to pave the way for peaceful diplomacy, but it will take elevating our understanding of music beyond the present. This matrix project will do this.

4. Traditional Limitations of Music: Music traditionally follows two methodologies of training: those with an ear for musical intelligence and those that implore the learned system of repetition. If music is a universal language of emotion, then why are we keeping large portions of people illiterate to it? Even if not everyone becomes a famous musician, emotion and music is a universal language that we all speak. This matrix allows for a multi-intelligent approach to learning music for the non-musical intelligence.

5. Upping the Quality of Music: With the introduction of technology, the musical market has been flooded with DJ’s, rappers, and musicians who can create music with very little training or understanding at the push of a button. This is great to some degree, but also creates industry stagnation. The use of these new music matrix technologies will allow the beginning and intermediate performers focused more on performance than practice to uplift performers to have an expedited training simulations that coincides with the simplicity of pressing the button. These new tools with give the ability to rapidly transcend the overall quality of music with new intelligent standards.
If You would like to get a glimpse of where this matrix project is heading, you can get an overview from the table of contents of the 132 page business plan for it. 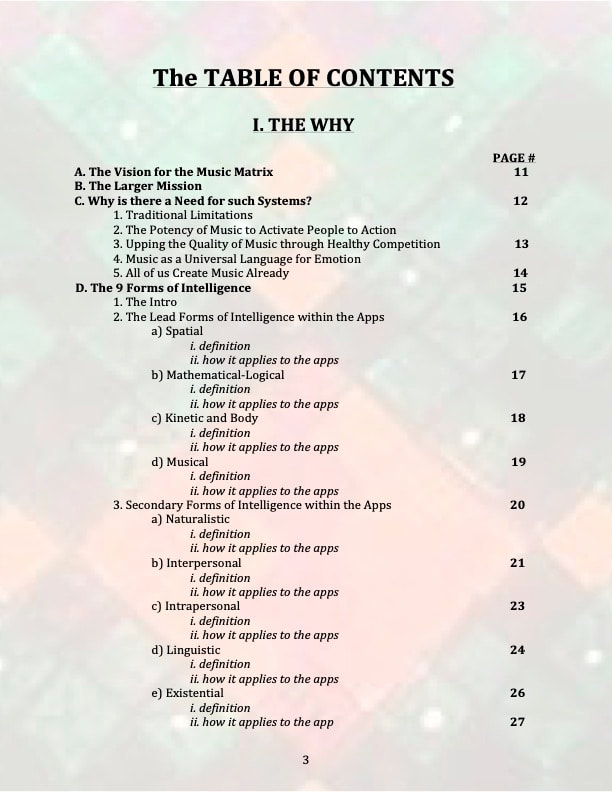 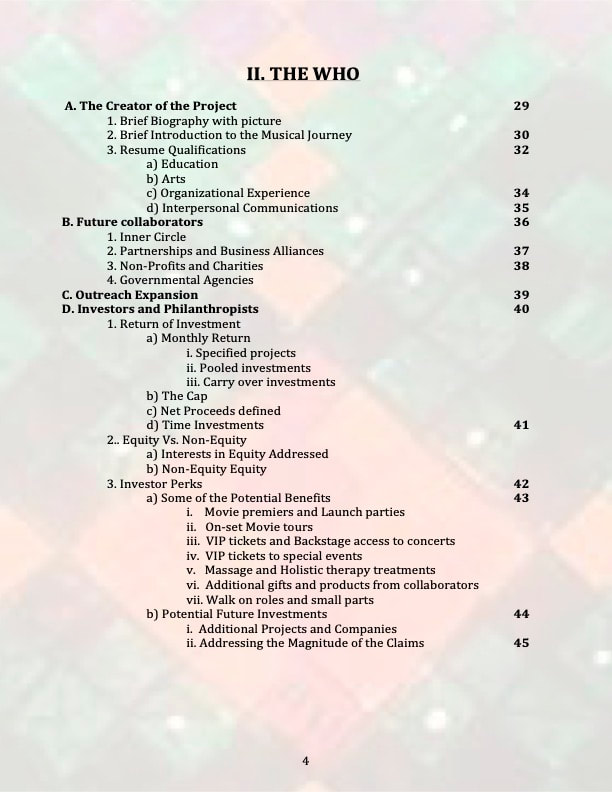 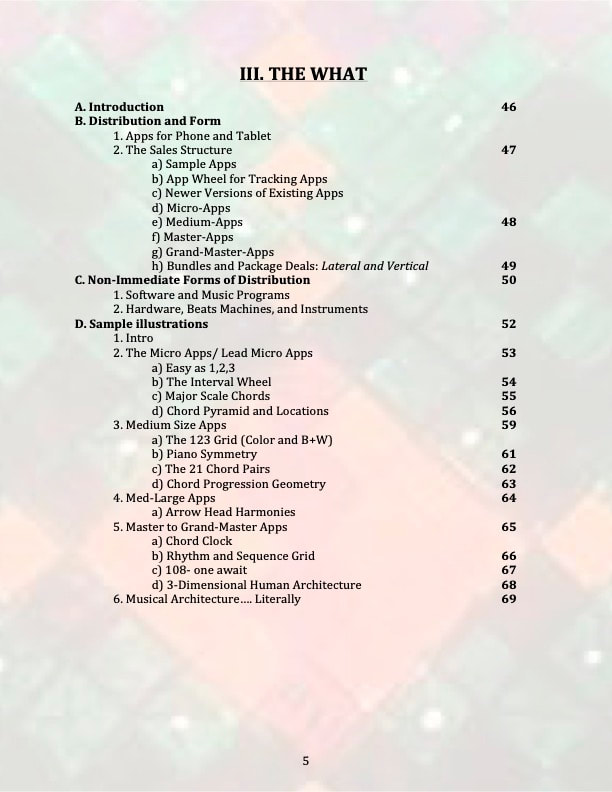 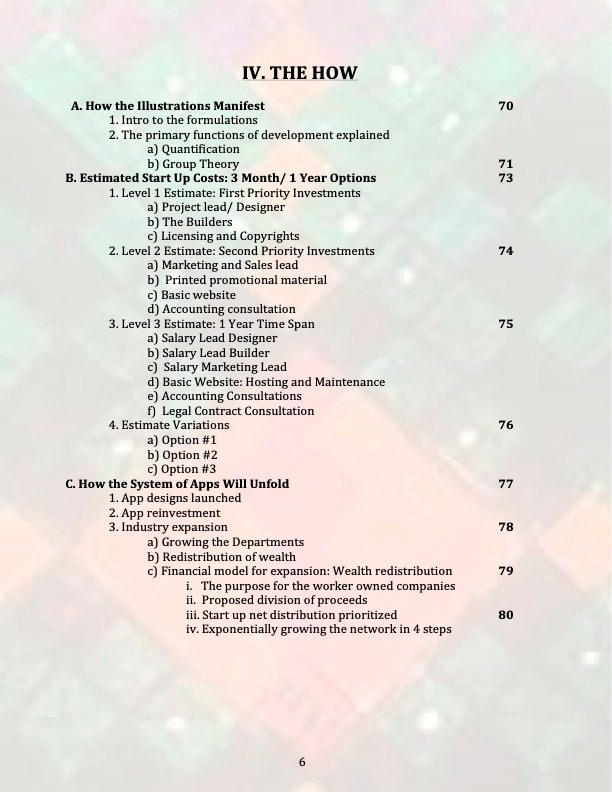 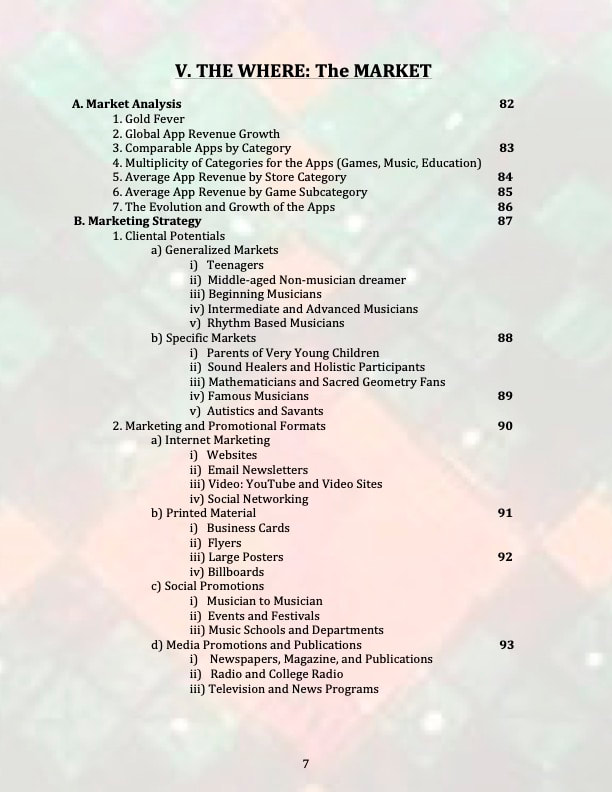 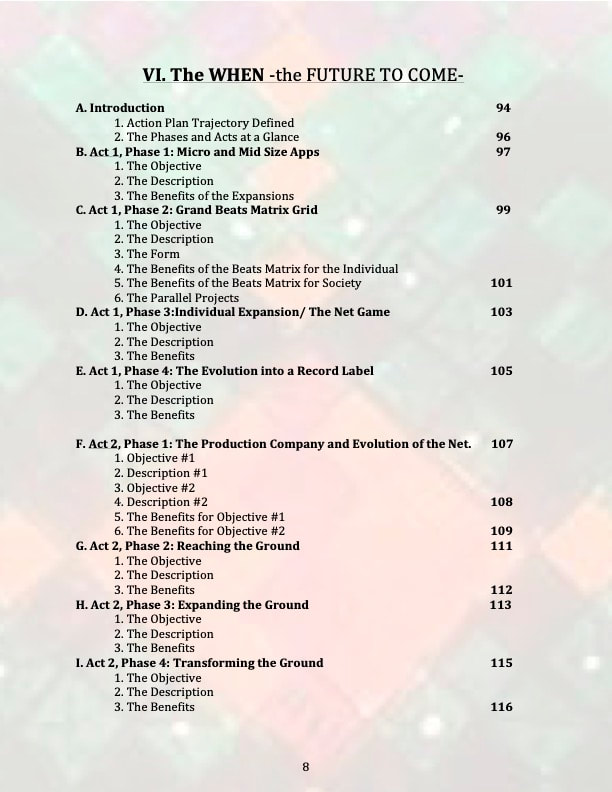 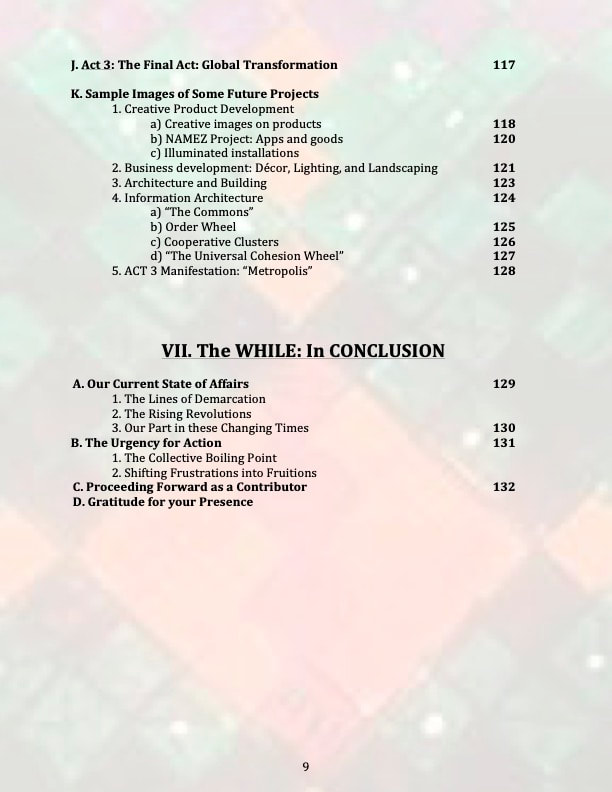