​
The following illustrations are to create learning shortcuts through use visual geometry that integrates traditional Western musical knowledge with non-traditional approaches. It's not meant to replace old theory, it is merely here to fill in all the blind spots that accepts knowledge without deeper understanding.

You can find a hundred-thousand music teachers out there who will all describe to their beginning students that a Major chord creates a "happy" sound, while a minor chord creates a "sad" or "somber" sound. Probably not one of them can tell you why or how it creates a happy or sad sound. This is knowledge without understanding. For the answer, you must seek other "intelligences" outside of just musical and mathematical intelligence.

HOW is it that some songs make you want to dance in a passionate love for life, while others want to make you tear your hair out? This is the musical understanding that is missing from musical knowledge. This is the new evolution of music. Music is the voice of emotion and every emotion can be expressed through music. Emotional Architecture (EA) and Musical Architecture (MA) have reflective and parallel forms. The study of music is the study of life itself.

GROUP THEORY: These illustrations utilizes "group theory" far beyond anything Western Music has seen today. They are defined by any number of parameters. To name a few: Rhythm patterns grouped by the number of notes they have, chords by the number of notes they have, common base intervals/chords in larger chords, quantify of strings played on stringed instruments, number of three note chords/ tritone forms possible in 12 notes, and the long list continues. To simplify how it works: To use one example of group theory, the number 2 - 5 - 9 -3 - 2 - 8 if given out slowly. Rather than mentally learning 6 individual numbers, one can learn two: 259 - 328.

QUANTIFICATION: Quantifying is a major part interwoven into group theory that works with other defined parameters. First you collect all the pieces under a certain clarification, such as 3 chord progressions, and then you group them into groups such as chords progression that are all adjacent to each other. After that you quantify the groups.

SYMMETRY: Symmetry is found just about everywhere in life and stem from the binary order of the universe. In music, they apply to every facet including notes, patterns, harmonies, cords, progressions, sequences. rhythms, volume, and so forth. Symmetry is not something taught within the mainstream musical education, but it is still foundational and can create reflective sounds between pairs or within a single pattern if that pattern is self-symmetrical. It is a crucial tool in forming any kind of architectural form. In addition, it accelerates learn, as if you learn one pattern, you also learn its symmetrical form.

BINARY: The musical notations of whole note, 1/2, 1/4, /1/8. 1/16, 1/32... are already within the binary form of 1,2,4,8,16,32... but it goes much deeper than just that. Every part of music can be mapped into a binary form and reduced back to two variables. Everything in existence can be reduced to binary form and pairs: Day and night, loud and soft, high and low, fast and slow, masculine and feminine, internal and external, etc.. Everything in between those dualities is merely different combinations of both sides. Long before there was the creation of computer binary, there was the I-Ching binary developed over thousands of years of observing the binary dualities within life.

SEQUENCING: Sequencing is merely the arrange the variables within a set group and seeing every potential without repeating. As only the order of appearance changes and the quantity type stays the same, all the potential sequences have a common sound in slight variation. If you have four notes, there are 24 different possible sequences. After you know a sequence, you can always duplicate notes or change their dynamics.

SHADOWS: Sometimes it is said that the silence in music is as important as what is heard. This duality is true. "Shadow" in this case refers to the potentials not heard within a common grouping. If you have 7 chords in a scale (I-vii*) and you place 5 of those chords, that pattern has a set of 2 shadow chords not played. In the same way you can learn a second chord by seeing the symmetry, you can learn the shadow of a pattern instantly by knowing how to translate it into shadow. This is yet another way of accelerating the learning process.
​
COMMONALITY: This applies to every facet of music, as well as the entire list above. When things have a common sound, they go well together, like people. When they don't have much in common it creates dissonance and diversity. One example of commonality is the CM and Em chords that share both the E and G notes.

OTHERS: There are still other key subject matters and parameters, but this should give you a taste of HOW these geometric formations come into existence using these tools from the tool box. Others include: Syncopation to Synchronicity, Synergy, trajectory, and so on.

SOME SAMPLE ILLUSTRATIONS
The following examples have already been published on various virtual platforms and NOT for use of distribution or development without consent. On some key information is omitted to protect the intellectual property.  If you are interested in trying out some of the illustration, that can be arranged with a Non-Disclosure agreement. Please keep in mind these are not intended as a beginning level, those are more simplistic. 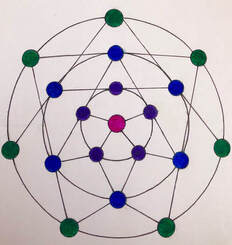 The above image is a 2D schematic that is the top half of 3D architectural design build off of 1/4 +1/8 notes.
The individual colors on the rings pertain to rhythm patterns that have both the same quality and quantity of notes.
The linear links are the patterns that have a single note that split apart or merged together. (common sound) 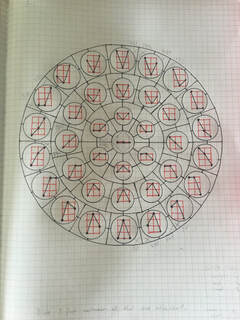 The above illustration represents all 37 potential string patters pf any 3 adjacent strings within a 4 fret span.
The red horizontal lines represent frets, though normally you place the spaces between them.
The red vertical red represents the strings.

A guitar player will recognize some of these patterns as chords.
​The other potentials are more outside of the normal tool box, but they are potentials none-the-less.

The is a complex 3D model created out the 128 rhythms patterns possible in 4/4 time that are 1/8 notes and greater without Rests.
This image and creation is not easily playable, but an eventual advanced model with technological integration will contain differentiations of loops and group by color with sound and LED light integration to create a visual learning tools to the groups of patterns.

It's just a glimpse into a future potential now.

Some Older Music Illustrations for piano and guitar.

​The following illustrations are of a much older nature with the latest one posted only happened in 2013. Though they haven't been counted, several hundred images is a safe estimate in the 9 years since the last one posted. This are all part of a musical matrix that will be automated in musical animations to teach the musical patterns to the sounds they create. Much of the newer music systems are being guarded from release to the public until the launch of the musical matrix. If you are interested in seeing more, that can be arranged with NA agreements. Please reach out if you would like to know about the new matrix that will be soon to come.
​ 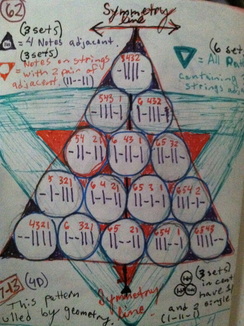 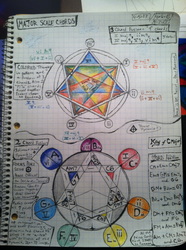 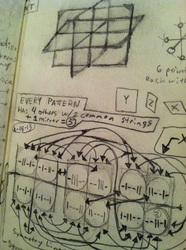 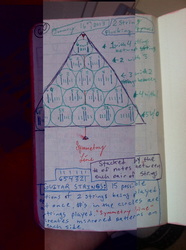 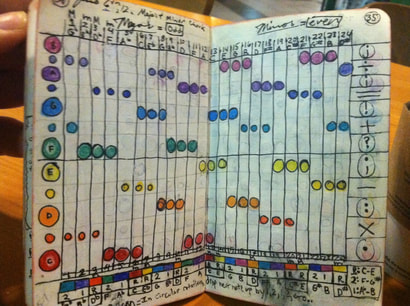 CHAKRA CHORDS!! 24 Chords/ 12 Major and 12 Minor from the 24hr Chord Clock overlapped with the Chakra energy system. It uses a traditional approach a the C note as the Root Chakra and C Major scale as the Major Chakras. Symbols on right align with the functions of the chakras and bridge chakras. Each chord can then be defined by which energy centers they activate...in theory.

This Illustration is about 13 years old, give or take. It cycles the 24 chords of alternating Major and minor chords within music. The chord that comes next has two notes in common. The top two notes of one chord become the bottom two of the next chord. Ex:: CEG=> EGB=> GBD=> etc.. They loop of chords also cycles through the Major scales (minus the diminished chords). The sounds of neighboring chords are pleasant because of their common notes.

New evolutions of this have manifested since its creation to also include complex jazz chords up to 8 note chords. 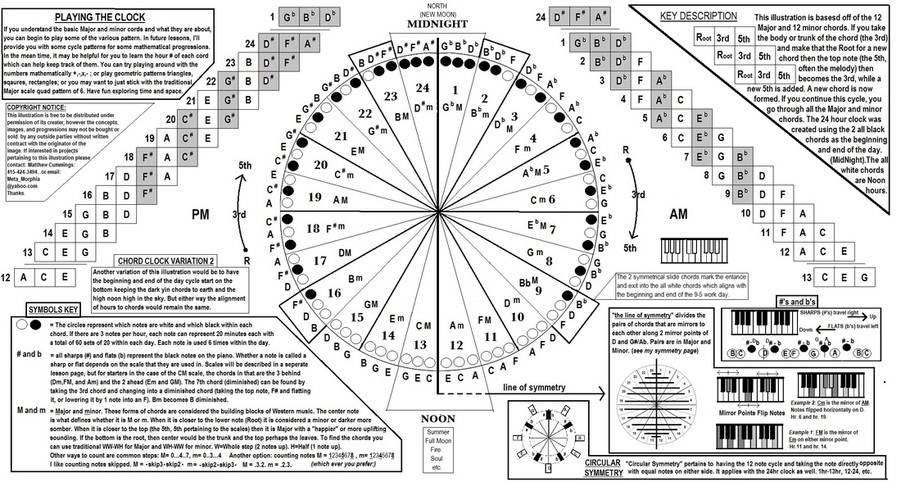 ​PIANO SYMMETRY: Using the mirror  points on the piano. 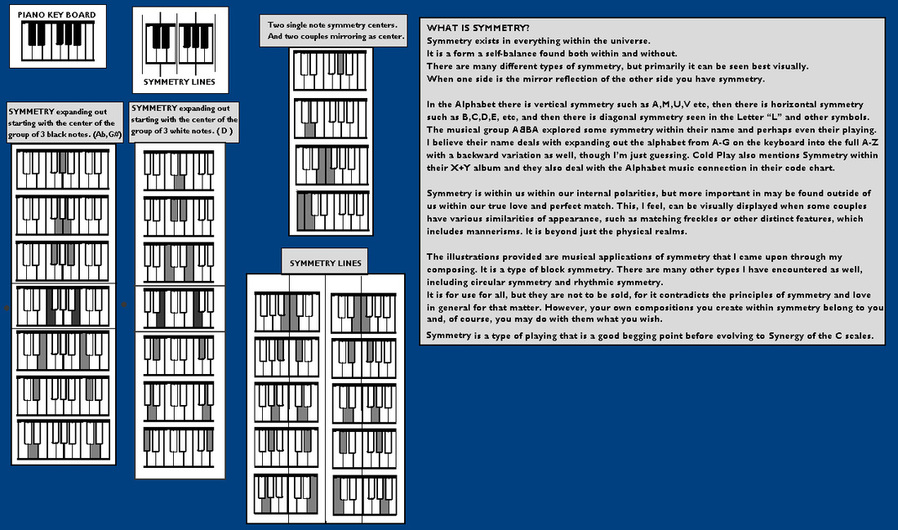 GUITAR FRETBOARD REVITALIZED: The following images of the guitar dissections are from some of the first musical explorations from around 2001-2002, later created into digital about 2005. While this might not be the best starting point for learning guitar, it is helpful to learn the symmetry of the white vs. black notes, naturals vs. sharps/flats. 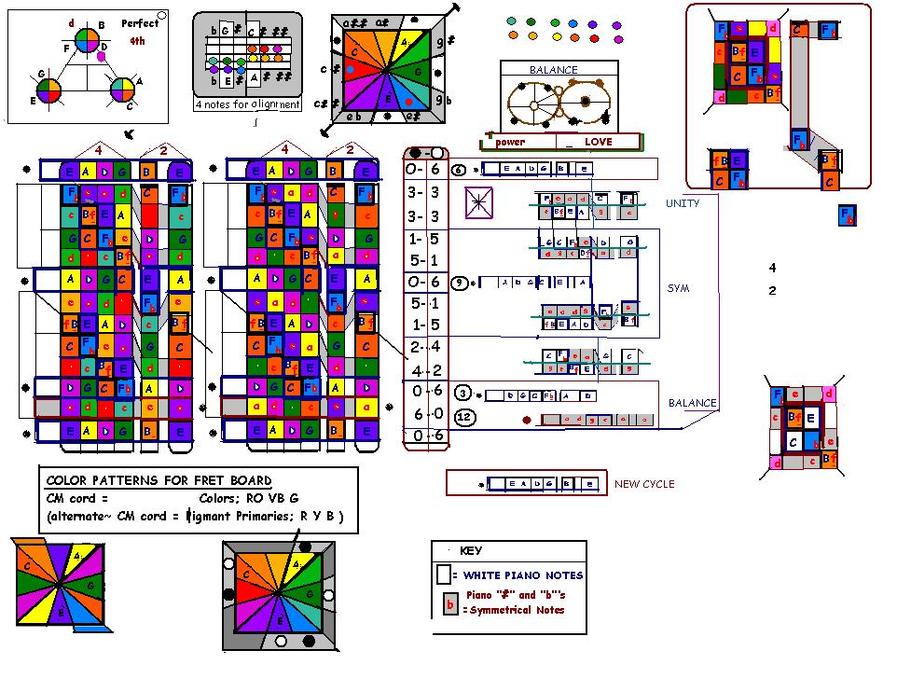 Music is everywhere, on the radio, on the television, in the wind blowing in the trees, in the vocal compositions created evoked from emotional conversations in the tone, volume, and pitch we speak. Music is a common language that every culture in the world has. Everyone is capable of musical expression; Our brains are wired for it. While some excel at making music, we all have the potential for creating it beautifully even if not as a profession. ​