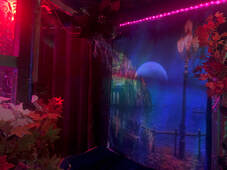 ​Welcome to the future! 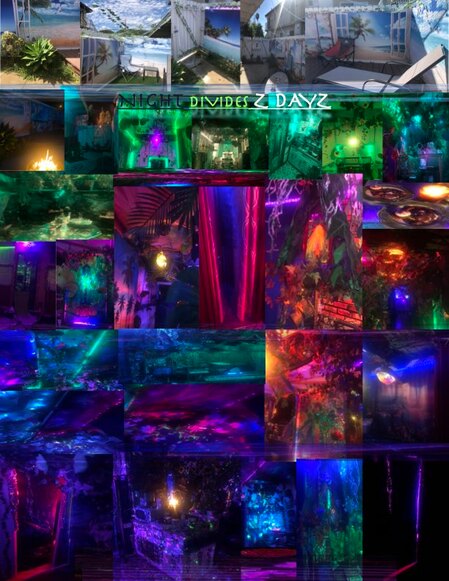 The New Renaissance is inevitable.
​Your two options to join it are... helping to launch it now or  joining it after You See it to Believe it.

The first renaissance began in Florance Italy and spanned roughly the 14th-16th centuries. It was a time of great transformation that expanded consciousness and brought humankind out of the Middle Ages and the lingering Medieval Age. The Renaissance contained many innovations and expansions of science, as well as architecture, theater, entertainment, visual art, philosophy, and much more. It expanded new ways of thinking that challenged old systems of suppression and control. It brought a new vitality that spread through and changed the world with a flourishing of culture and art that provided new sustainability for many.
​
There were many factors that played their parts in creating this great time period, but it was the tools that allowed it. The new technologies like the printing press, the greater social interactions through increased trade routes, and a new understanding of humanism had fueled the very Renaissance into manifestation that brought so much vitality and prosperity. History is now repeating with new tools and technologies.

THE PREQUEL TO THE NEW RENAISSANCE
​

The prequel to this New Renaissance started within the 60s art and culture movements. Much like the Flourishing of Florance, the Flower Power of the sixties brought about a similar movement of creativity, love, and expansion of consciousness that was flowering way back in the Italian Renaissance.

The sixties “Flower Power” movement overlapped with the Civil Rights Movements within a time of great expression and creativity that spread around the world. While the new “medicines” played their part, so did the recent technologies such as the television and radio that spread the news of war like oppressions both home and abroad. Technologies spread the news of the unifying counter-culture against it. The intensity of the transformation literally changed the way the world looked and acted. The sixties was the birthing of a new renaissance.
​
Unfortunately it fizzled out though for several reasons. Part of it was because the technological platforms were inaccessible to most, unlike the modern day social media that is like a new printing press in digital form. Another reason for the fizzle out is that in order to activate a new freedom that allowed heighten creativity, many had escaped the confines of structure and systems. And while escaping corrupt systems served its purpose of freedom that spanned creativity, life without the structure isn’t sustainable.

The 80s, in a way, was the mark of the last recognizable decade with the uniqueness of mainstream fashion and music. It is as if it is a trail off of the blossoming 60s and transitionary 70s. At the same time, the 80s began a great technological renaissance/ revolution of its own via the business angle, albeit far less colorful and filled with joy. This technological blossoming of the Silicon Boom has been a set up for the New Renaissance about to rise. The birth of the "digital press" is as equally revolutionary as the birth of the printing press.

After 2020, through the initiation of the pandemic, a great push for the expansion of empathy and new change has initiated. Recently we’ve had new movements within the civil rights push that happened in large numbers that resemble numbers 50-60 years ago. It was the technology and use of digital tools, such as phone cameras and the internet, that actually made this possible. Same as with the first Renaissance that was sparked within expanded humanism, greater social interaction, and technological advancement, we have all the ingredients for a New Renaissance. It’s inevitable and unfolding.

What makes this time different from the 60s' peace and art movements and Civil Rights Movement is that this time we will also include the business angle that will provide the needed sustainability that will keep it from fizzling out. For this though, we will need to revolutionize our perception on the way business is to be done.

It is no secret that we are all playing a game that festers greed and hoarding which leaves so many in desperation and depravity. The inequality of this is based on bad math and a misaligned value systems. The virtues within us stopped being the value system long ago.

The New Renaissance Business Model is intended to balance out THE TRIAD of BUSINESS, SOCIAL, and CREATIVE-INNOVATIVE. The true architecture of sustainability forms an equilateral triangle where each of the three are in equal proportion with a balance of community, creativity, and business. Technology is at the center binding all three together.

In the old/ present model, the business angle often controls most of the 180 triangle degrees, while minimizing social exchanges and their individual creative expression. In an empathy balanced “Equilateral Business Model”, there’s a harmony of the angles with a focus on rightful wealth distribution and raising up struggling and hurting communities. The only way to launch a New Renaissance is to utilize a new enterprise model that allows for sustainability, to increase social interaction and empathy within, and to increase participatory creativity within the business. Social, creative, and business were key ingredients within the first Renaissance and will be vital within a new one.

The Faces Within: A polished screen play about a girl with a utopian vision for a future world that must confront the pessimism of our own world.

The Music Matrix: A complex network of new music systems that will ignite a boom in global musical expression.

The Renaissance Cafe: A new model cafe center the utilizes equality and business with enterprise development.

Renaissance Hubs: For helping to balance out needs and desires of local communities, while uplifting and revitalizing their neighborhoods.

Youth Centers: For underserved and at risk youth to get a multi-intelligent approach to life that allows them to flourish.

Production Company and Talent Agency: For flooding the mainstream with healthy and uplifting events that celebrate the virtues of life.

Renaissance Style Marketing: A sustainable marketing strategy approach that inverts the flow of information to eliminate time and waste.

The list of projects goes on and on. As this is something the world hasn't seen, it's beyond most's imagination to visualize the extent.

Thank you kindly for taking the time to allow the presentation of this larger vision.

Below are some small tastes of your host's own personal preference for a Renaissance themed live-work apartment.

These are from a continually evolving walk-in art installation piece by Mr. Dayz.
if you'd like to hear a little about your host's long journey to this point...

My 20 YEAR HISTORY of PUSHING FORTH a new RENAISSANCE
​

It was within my moving to San Francisco in 1999 when I first reconnected to the dreams of the 60s and the legacy thereof. It was here that I was saturated within the very city that played a crucial roll within the Flower Power era that was in conjunction with the civil right movements. It was an enlightening and educational experience. In that time, while attending college and absorbing the history of the colorful 60s, I also began exploring the facets of the old renaissance within the study of theater. After that, I began writing theater scripts that pushed forth some of the themes, while dreaming the scripts would span the globe to enact some sort of undefined change. In 2000, I wrote The Faces Within stage play that held renaissance themes.
It was in the turning of 2000 into 2001 that I began contemplating the launching of some sort of new type of technologically based artist revolution-movement to change the world. In the spring-summer of 2001, I began designing the structural vision, the informations architectures, and the musical architectures. Interesting enough, it coincided with the directing of Alice in Wonderland and the the initiation of 9-11 right in the middle of the project. This reinforced the need for the vision.
In 2002, after leaving institutionalized education, I began an event production company with others with the intent of launching a sustainable artist movement through use of communal enterprise. The intent was to launch a peaceful artist revolution. My motivational energy held the connection to the history of the sixties cultural movements that were prequel to modern times.
It was shortly after in around 2003 that I came to realize that what I was trying to launch was a New Renaissance, so I coined the name The Renascence Scene with the launch of an event under the same name. As part of it, we included business developers recruiting names for the co-creation of sustainable enterprises, something I’ve still never seen at any other event I've ever been to. After the realization of its identity, everything I’ve been working toward since then has been for the launching of a New Renaissance that I termed Renascence.
Since those early days, I’ve pushed many projects and concepts revolving around launching the Renascence, but really… how do you convince people to believe such a thing is possible, let alone get them to commit time and resources to it. In that, creating the momentum needed for launching a renaissance movement takes resources and supporters of the concept that have been unavailable to me no matter how much a push. While I’ve eased back on the terminology and just pitched individual projects, the plight hasn’t changed to this day. With the many recent and dramatic changes since 2020, I’ve been pushing forth the concept once again to get it into the main stream. Whether or not Beyonce’s new album titled “Renaissance” came from my pitching of the concepts and names, I can’t say… but it’s good that there are some sparks of validation out there that draws curiosity as to what a renaissance is.
Currently, one of my goals is to gain a considerable main-stream semi-celebrity status, not because I have a desire to be famous or well known, but because I know that it is the best way to have the status and followers to validate such a vision currently outside of the imagination of most. Also, it’s a lot easier to launch any kind of venture when you have the resources to do so. I spent so much time just trying to convince people of the true value, that it's probable subtracted many years of creations from my life. Of course, there's life lessons within that too.

All that said, I appreciate your presence here to day and encourage you to start imagining what it would be like to have a global renaissance spanning every culture and country. What part might you play in such a thing?
Wishing you health and happiness in whatever direction you may choose.

SEEING THROUGH THE EYES of
SOLANDRIA..
our hope for the world. 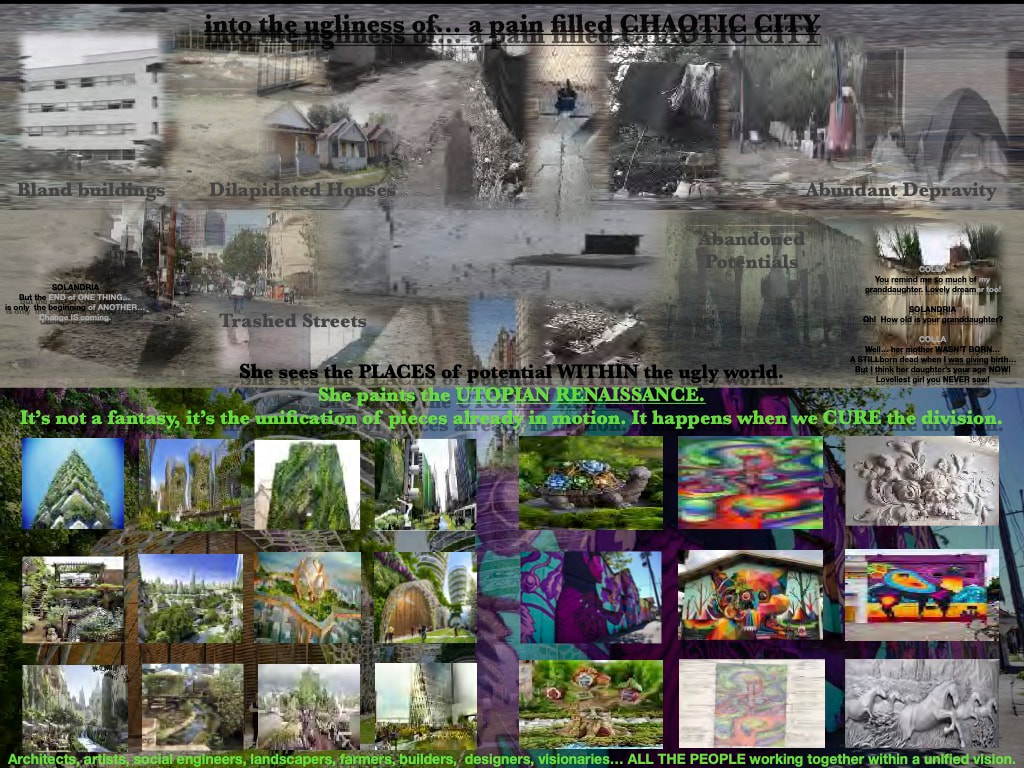 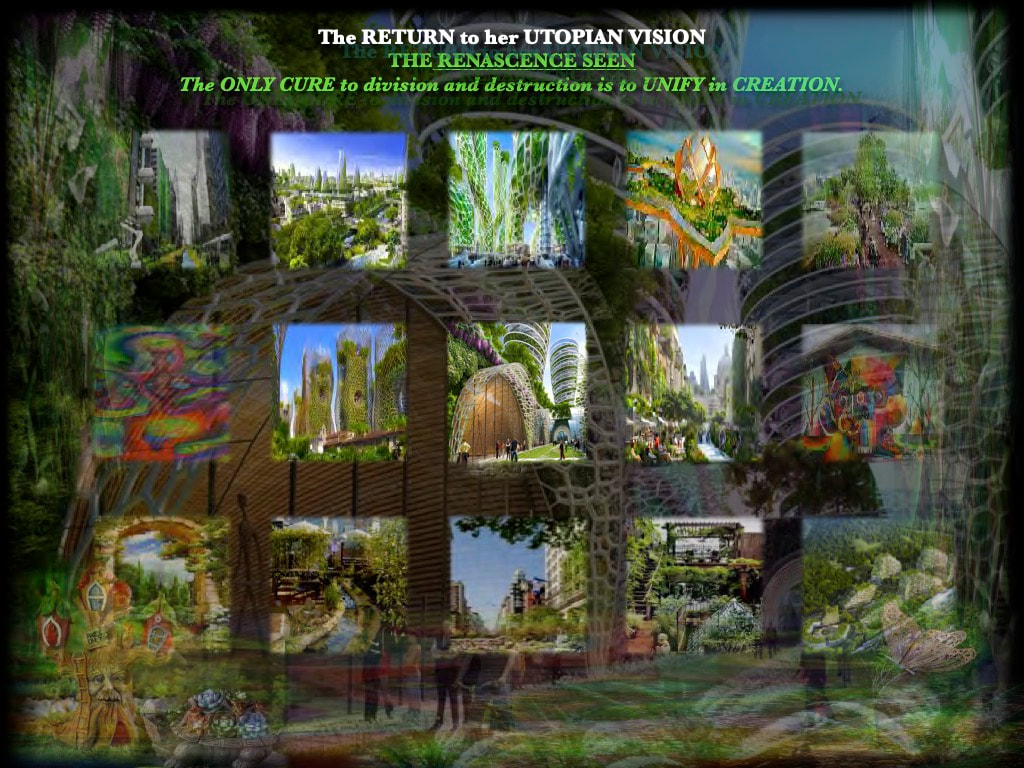 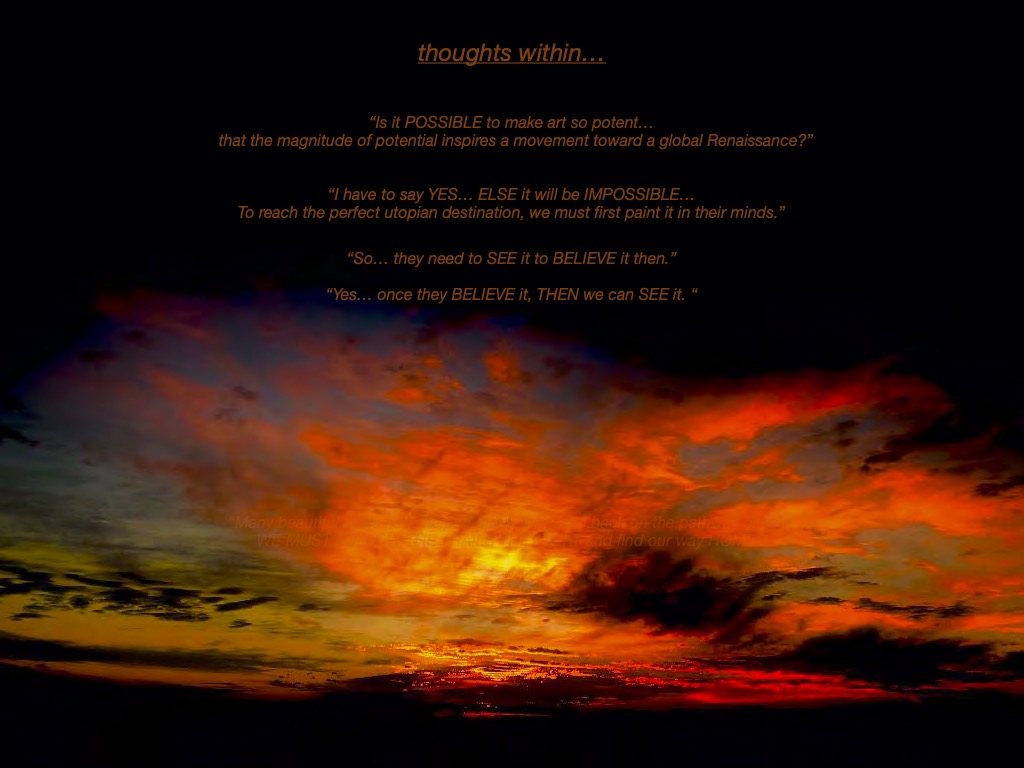