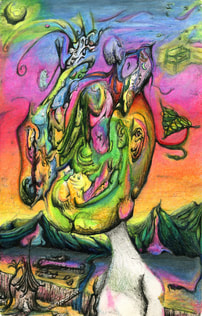 who is ZIGGY DAYZ?

A multi-versed soul with a better vision for society that that which we are given.

For over 20 years, Ziggy has been working to start a new sustainable renaissance that will balance out the old business models of inequality that have impoverished the world. His intent is to create equal rations of business, social, and creative fused with technology in ways that will provide sustainability and ownership to the participants. The old way has failed. Time for new ways.

Over these past 20 years, far before being "woke" was trendy, Ziggy has been working to bring on a global visions, while exploring many skills and creative ideas. From down upon the ground, he has been attempting to convince the 99.999% of the population who don't believe global transformation is possible that it actually is. At the same time, he seeks to find that .001% that actually do believe in it to join him in manifesting it. It will take the entire world to change the world, so the only solution is to find a way to convince him... hence his attraction to Hollywood, a global platform and microphone to the world with massive untapped potential.

WHY "PUZZLING CLOCKZ":
In 2001, just before 9-11, Ziggy was exploring the many systems of information including within language, mathematics, color, music, symbols, frequency, "the universals", and much more. This was initiated through dissecting everything within the two Wonderland books: Alice in Wonderland and through the Looking Glass. It was for a college directorial project for a 20-50 min student directed piece. Alice in Wonderland was chosen after an actual dream entering through a door into a Wonderland garden with illuminated neon-red and the voice of Morpheus from the Matrix saying, "Now you'll see how deep the rabbit hole really goes." In addition, a mysteriously placed spin-off book of Alice in Wonderland was on a step in a stairwell. This entrance into Wonderland began the first puzzling of the clocks, which have now grown into a large matrix of apps and technologies still awaiting to be built. The intent of the piece from the start was to create something so potent that it would spread through the world. Unfortunately, during the assembling of the script and working with the cast in Fall of 2001, a great fall occurred, the falling of the Twin Towers. Every one fell down the well, as a new global shift initiated. That is the true story to the beginning of Puzzling Clockz; the clock hasn't stopped yet. Sacred Geometry is the very order to life itself that we, as a whole, have yet to gain consciousness to outside of posting pretty geometric pictures of architectures without applicable use toward ordering the chaos. The future is understanding these very pieces and potentials of life so that we do not have to walk through life stumbling blind. Ziggy IS a clock puzzler puzzling puzzling clocks.

HE WEARS MANY HATS...
Each one of them a piece to a much larger visions toward global transformation:

To sum up Ziggy, he's a self-programed wheel of potential who has chosen the "impossible dreams" knowing that someone has to believe that they are possible for us to reach our greater global potential in achieving them.

​This website is currently in reconstruction, as it's been floating on the great net-sea for many years untouched. For now, it contains a variety of creative designs, services, and projects that are pieces within manifesting transformation... one piece of the pie at a time. Some of this site is outdated within the reconstruction and evolution. Like life and ourselves, it is about elevating out of the old. Please be patient, imagine, and enjoy!

Here are some pages to see a few samples from a much greater portfolio.
click on the pictures

"PUZZLING"...
is it a state of confusion
OR... is it an active piecing toward a larger picture?
It is indeed puzzling.