​Dear Reader, thank you for your presence here. To sum of a "Global Vision" upon a single web page is the same thing as asking someone to write the future of the world onto a one-pager. It's not an easy task. John Lennon tried to do it in a single song called "Imagine", something still a mystery to this day. And despite that the instructions of to imagine were very clear, most of us still haven't. So for now, this is a glimpse of a few global visions and a bit about it.

No one person can describe the totality of a global vision, as it is a weaving of visions from many. We can often only see into the future that which aligns with our purpose and what we are planning to do within it. If we know it is true at the core of our being and we are right about it, then we have seen into the future our part within it.

What is for certain is the current deconstruction of our forced mental constructs that have given tangibility to our called realities. This is a great awakening. The more you can see through the facades of pretend, the closer you become to seeing the true reality to it all.

For now, this page is just a glimpse into potential with some large scale projects that align with the vision of a better future that benefits all. 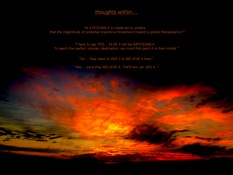 "They have to see it to believe it."

We are merely actors upon a global stage enacting the characters of our creation. We play the roles either given or chosen. The legislators write us scrips we are told to follow. The media writes us scripts about the way things are. We put on costumes and suits and show up to sets called "work". We carry out the blocking and actions of the characters we call "bosses". We put on makeup and fix our hair for our performances that will dictate the perceptions of our audiences. Cultures set traditions that become more like rehearsals in front of life theatrical audiences. If you stray from the blocking, if you deviate from the script, if you do not follow the directions or expectations of societal norms, you are out-cast. This is the truth of our societies. THIS IS HOW THE WORLD IS A STAGE.

What is... "The Global Vision"

It will come from the dreamers of the idealist perspective who will lead the way, with assistance of those of the realist perspective who will help shape it into reality with their knowledge of the way things are. The idealist is the PULL we surrender to, while the realist is the PUSH we move things into the future with in building momentum. What The Global Vision will look like is up to us. 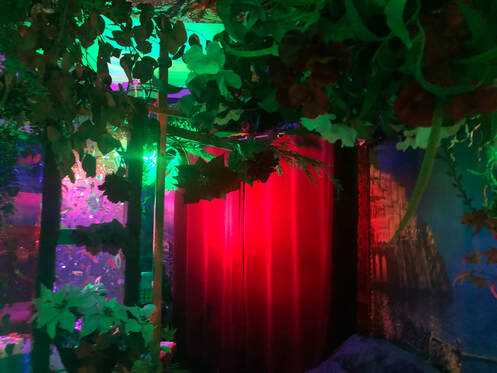 ​
Below, you will find just a few small contributions of my own vision within the larger puzzle that have been posted on here from a while back. There is much more, so this is just a taste. I sincerely hope that you will find them uplifting and inspiring of this new world and new renaissance we shall all create together. What will your part in it be?

With love from me to you,
Ziggy 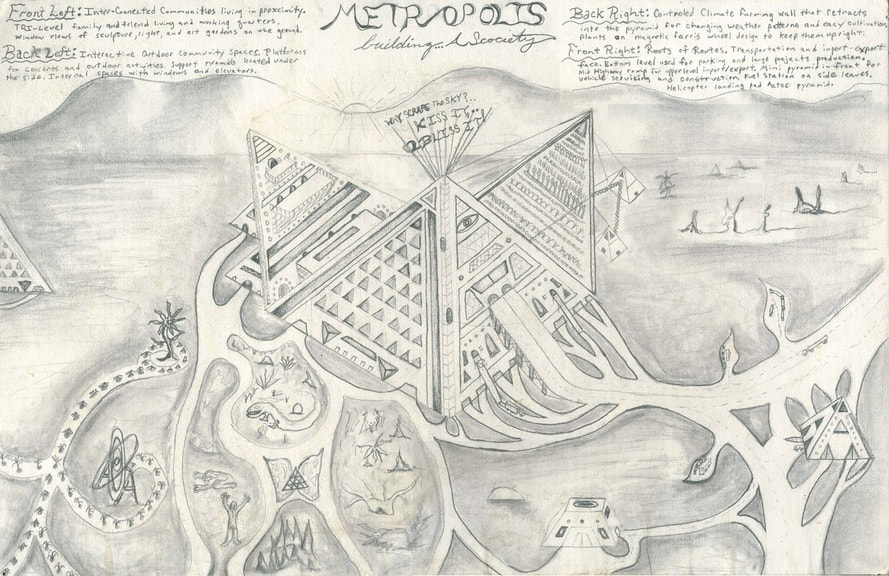 METROPOLIS Building... A Society.
Desert vision manifested into a design for Burning Man 2010

FRONT LEFT side of pyramid: Inter-Connected Communities living in proximity to each other. Triangular windows represent tri-level living quarters for family clusters and friends. Window views of ground level provides growing sights of sculptures, art gardens, lighting displays, and landscapes, while facing the sunny side. Sculptures and art will continue to grow higher and higher to the sky expanding outward and upward. Where the two front sides meet, glass elevators carry people up from ground level to upper levels.

BACK LEFT side: Interactive outdoor community congregation spaces for unified activities. Platforms offer stages for concerts, gatherings, and other outdoor activities. Smaller support pyramids ground level support the weight of the open wing of the pyramid while supporting the large scale needs of the public gatherings. Some seating outside, but windows lining the wing and rooms for siting and viewing offer indoor comforts for watching events and hanging out. Elevators travel inside the walls. In-side of pyramid to be designed.

BACK RIGHT side: A lightweight controlled climate farming wing that retracts into the pyramid for changing weather patterns and easy cultivation. The plants are on magnetic Ferris wheels designs to keep them in an upright position.

FRONT RIGHT side: Roots of Routes. The routes give and receive vital resources needed to propel society in a truly progressing direction. Import-exports of vital use to mid-level activities and functions use the mid-level direct ramp to keep time efficiency. Also lower-mid levels delivery ramps add to time efficacy. Bottom level roadways offer access to bottom level for parking needs. Entrance ways on all four sides. Vehicles use leaves off of roads as mini service stations for fuel and other needs. Mini pyramid offers a vehicle servicing, repair, and construction needs. Mayan shaped pyramid to the left of the service one offers a landing pad for helicopters and future hover crafts. The eye acts as a massive projector illuminating large mountain scapes at night.

THE INSIDE: Though it is not shown here in this illustration, the inside is comprised of various levels that each have the own theme and story. Area of themes includes aspects of basic needs and resources circulated on the root level, organizational development, enlightenment, compassion needs, creative needs, perceptional desires, and upper level sun and star planetarium spaces. Layers within the levels would be geared to generational interaction and community development between themselves and their peers, as well as multi-generational bridging and informational exchange

THE TECHNOLOGY: The major functioning of operations within the pyramid is dependent on technological advances that keep guides of order that offers ease of function. The pyramids are intended to assist the progression of society which creating a natural flowing system of order that works for all people involved. The technology is a bridge from the micro-societies into the global society. It is intended for those dedicated and advanced to that cause, but also it is intended to replicate itself for others interested in the same... so it is for everyone.

STRUCTURAL SCHEMATIC FOR MICRO LIVE-WORK PYRAMID
This illustrations was created in about 2005-06ish. It is a smaller pyramid designed for a cooperative style community living in an open space. It is a 4 level pyramid with the lowest level for the import and export of collectively produced goods. Unlike our semi-disposable wood houses that deteriorate with the decades, these are intended to last for a much greater length of time. 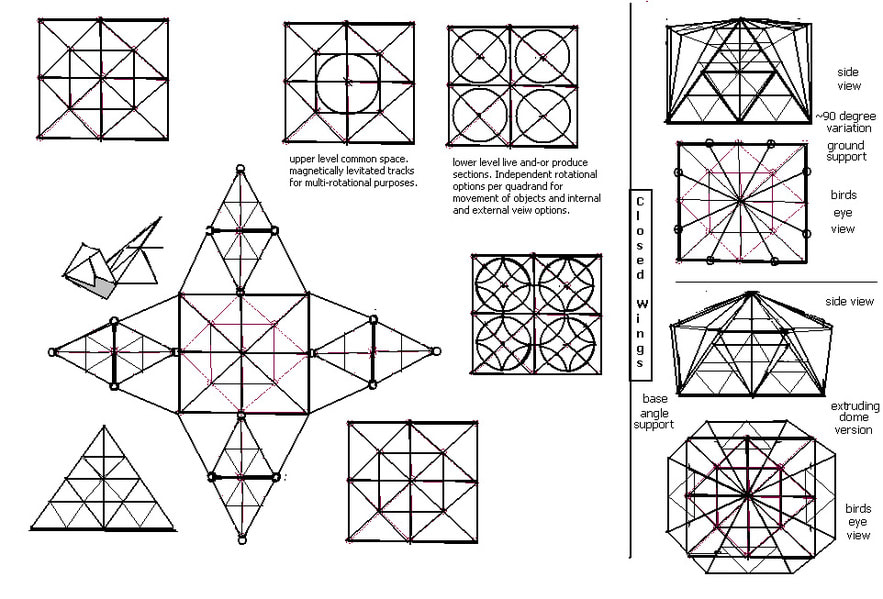 This illustration was created through word play exploration...with the pursuit of understanding the "Common". All the "common" words found in the dictionary were collected and sorted and then placed in this formation based on logical deduction. It may seem confusing, as we as a society have become disconnected from some, if not most of the definitions, even is some seem familiar. The 3 center pieces chosen to represent the whole are "Common-Good", "Commoner/ Or" and "Common Sense". Common sense perhaps being the 6th sense (Think).  Some of the words are further divided, such as "Common-Land" that is derived from "Common-Good".

It's intended to be a governmental/societal data-base, (the new US Senses) designed to keep individuals and common-resources in the population to see to the betterment of their lives. In time it will be launched as an independent Census site data base. In reading the terms, you might want to say the word common before the words in the pyramid to make it make sense. Definitions and links will come in time as it has not be revised with new understanding since its creation about 13 years ago. 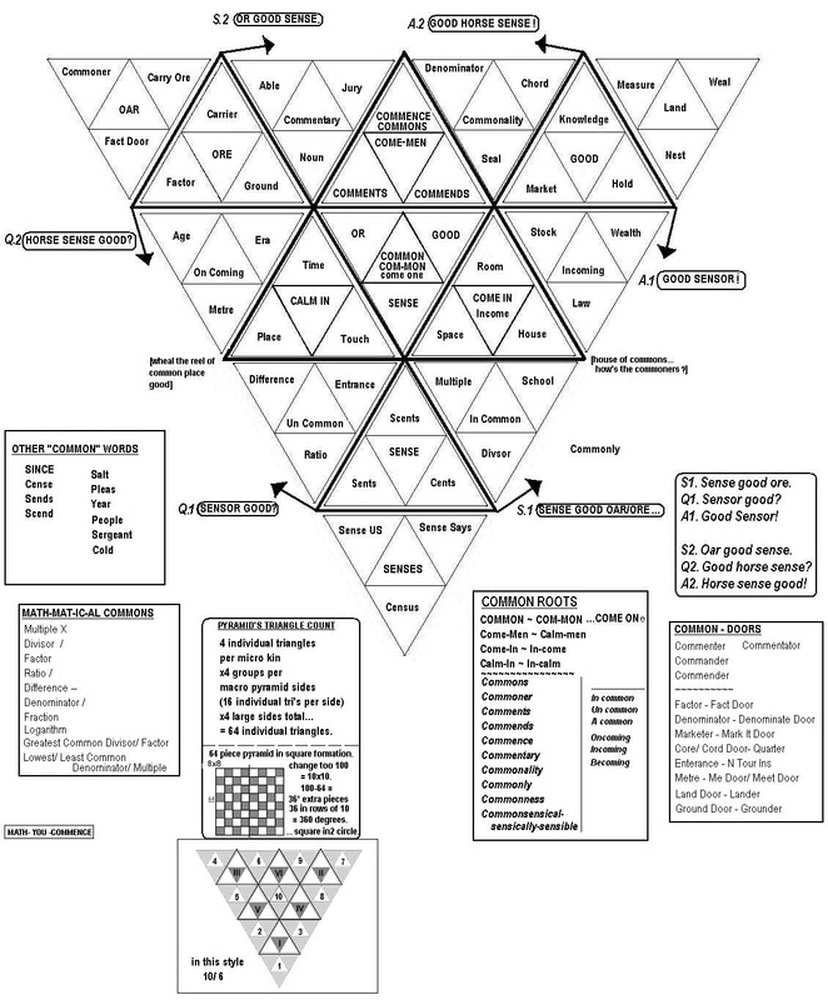 COHESION WHEEL
Originally created mathematically by hand in 2002 and then recreated crudely in 2005 in a simple draw program. The design was later copied by FOX News and used as the bottom left logo and then versions of it spread to other news networks. Eventually they abandoned the use of the images and image concepts long ago.
The image is a multi-leveled search-engine design and data base for sorting of information, a type of software that can also be transformed into a type of hardware. This level and first image contains none of the information architecture here to make it operational that makes it more than just a pretty picture. As the rings move and can be sorted into levels there are multiple evolutions and illustration forms of this, some taking on 3 dimensional forms. Each of the rings are specific to quantity and the colors have relevance.

With regard to the rings, the same way people have been sorting information architecture lists into quantified potentials, such as Past, Present, Future (3), seven days of the week, five levels on the Hierarchy of Needs, this search engine combines many of the common groupings we've collected for thousands of years and still continue to collect. It allows us to see the parallels between quantified potentials. While the building of it will be complex and massive, when complete it will give the globe a clear way to sort existing information into an easy navigable map.

​This sequentially numbered search engine will also coincide with a "new binary" visual search engine that will share how information divides and merges using the principles of simple binary. 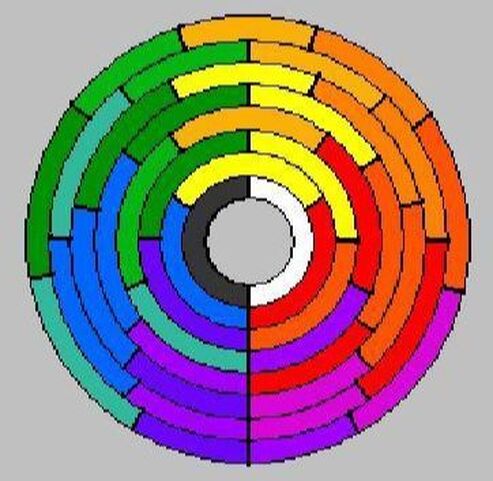